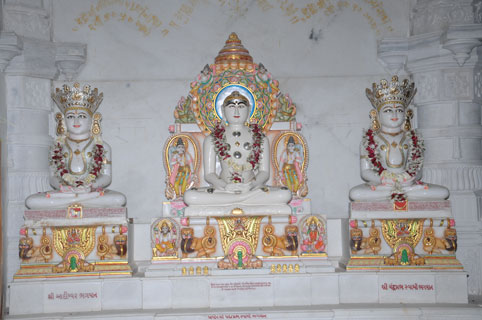 The existence of the idol of the “mulnayak”, Chintamani Parshwanath is said to be more than 2200 years. There are 3 idols; in the centre, the “mulnayak”, Chintamani Parshwanath, the 23rd “tirthankara” of Jain religion, flanked by Shree Padma Prabhu Swami on their left and Shree Shamlaji Parshwanath on their right. All these idols are ancient and believed to be “chamatkari” – transcendental, retrieved from excavation of the farmland of the surrounding areas.

Ages ago, it is said that there were around 2000 Jain families in the village of Vanachhara, but with natural calamities, including heavy flooding of the nearby Dhadhar river, people have migrated to different places and the number of Jain families has dwindled to almost none today.

The “derasar” is the centre of the village and surrounded by houses and school with limited open space around. It is said that the “derasar” was renovated around 850 years ago by two brothers Hansraj and Vachharaj. But with age, over the period of time, the “derasar” has been damaged, but miraculously the pratimaji of all the three have been intact.

Because of this, the “derasar” is now newly constructed rather than renovating it with open space and with addition of nearby “upashrayay”, “dharamshala”, “bhojanshala” with majestic, yet calm, tranquil air of peace and relaxation.